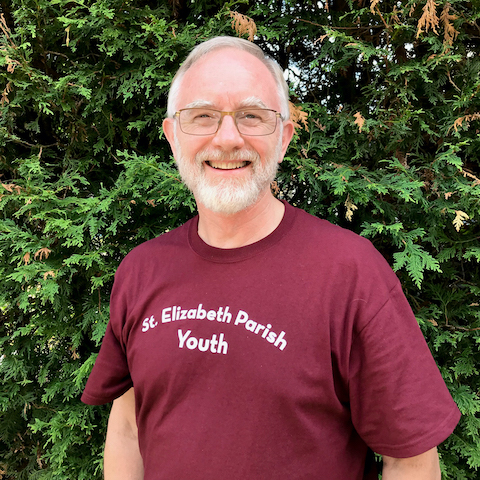 I am pleased Archbishop Prendergast has re-assigned me, effective Aug 2020, to continue as the deacon at St. Elizabeth’s for a three-year term.  I love being at STE.  I have developed wonderful friendships with Fr. Martin and many of you, and I really enjoy working with our amazing young people.

I was born in Halifax Nova Scotia in 1957 when my father was then serving in the Royal Canadian Navy. My father and my three wonderful sisters/their families live in the Ottawa area.  My mother died in May.  I also joined the military (navy) and served from 1976 until 1997 – specializing in engineering and project management.  In 1980 I graduated from the Royal Military College in Kingston with Bachelor of Engineering (Electrical), received a commission, and married my high school sweetheart Sarah. Together we have been posted to Esquimalt, Halifax, Kingston (Master’s Degree), Toronto (Command and Staff College) and twice to Ottawa.  On July 19th Sarah and I celebrated our 40th Anniversary – with sincere appreciation for the kind words, cards and blessings we received at the Mass.  Our three ‘children’ are grown up and married (living in Stouffville ON, Stittsville ON and Gloucester England).  We have two grandchildren – Helen in the UK, aged 2, and Ava here in Stittsville, 8 months.  From 1997 until 2021, I worked in private industry in naval engineering projects.  I “retired” in 2021.

Sarah and I have both pursued theological studies.  Sarah has a Master of Theology from St. Paul University and progressed doctoral studies.  I entered diaconal formation here in Ottawa in the four-year academic and practicum program beginning in 2003.  On June 10th, 2007 Archbishop Marcel Gervais ordained me.  Since ordination I have also taken several undergraduate theology courses at St. Paul.  Scripture is without question my favourite area of study.

In my younger years I was involved in wrestling (Olympic, not TV style), judo, soccer and rugby.  I was once a reasonable distance runner, having completed three marathons.  For exercise now I enjoy hiking, being outdoors and playing (far too infrequently) guitar, banjo and mandolin.  Together Sarah and I share a passion for cooking and gardening.  I love spicy food!!

Some may ask, what is a deacon?  It is derived from a Greek word diákonos (διάκονος) which means, “servant” – a deacon is ordained by a bishop (receives the sacrament of Holy Orders) for service of the Word, at the altar and in the community (frequently with those who live on the margins of society).  I am a “permanent” deacon, different from a “transitional” deacon who will go on to become a priest. Fr. Martin and Pope Francis were first ordained as transitional deacons. Married men may be ordained as permanent deacons; in fact, most of us are married. We cannot say Mass, absolve sins in confession or offer the sacrament of anointing of the sick. Most deacons serve without salary – good value for those keeping the books in Temporal Affairs!  During my formation and since ordination worked with the Shepherds of Good Hope, the Royal Ottawa Hospital, an inter-denomination spiritual care ministry and with indigenous people at Kateri Native Ministry.  Prior to coming to STE in Feb 2018, I served as deacon at St. Patrick’s Fallowfield and St. John the Apostle.

What is a Deacon?

Deacons are ordained ministers, incardinated in a Diocese, or in some other ecclesial reality that has the faculty to do so[116]. They are collaborators of the Bishop and the priests in a singular mission of evangelisation and with the specific task, by virtue of the Sacrament received, to “serve the People of God in the ministries of the liturgy, the word and charity”.
…
In that same address, the Holy Father offered some clarifications regarding the specific role of deacons within the ecclesial community: “The diaconate is a specific vocation, a family vocation that requires service […] This word is the key to understanding your charism. Service as one of the characteristic gifts of the people of God. The deacon is, so to say, the custodian of service in the Church. Every word must be carefully measured. You are the guardians of service in the Church: service to the Word, service to the Altar, service to the poor”.